You are currently browsing the news archives for May, 2011.

Delcan Technologies is proud to announce a new contract for an Intelligent Border Crossing project. DTI is working with MAC Electric, Hensel Phelps Construction, the General Services Administration and Customs and Border Patrol to integrate and implement an Intelligent Border Crossing System for the new Nogales Land Port of Entry on the United States-Mexico Border in Nogales, AZ.  This marks an entry into a new market segment for Delcan Technologies which brings new opportunities to implement ITS solutions in the Homeland Security market segment. 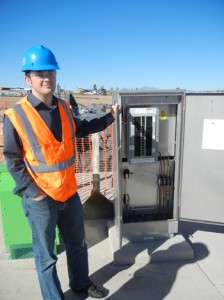 Delcan Technologies will be serving in a design/implement capacity to MAC Electric for the traffic signalization and dynamic message signage (DMS Signs) for the Port of Entry.  Delcan Technologies will be using NTCIP standards to integrate the DMS signs, traffic signal heads, video detectors, border patrol agent input panels, border crossing gates and other traffic detectors under a single system by using ATC traffic signal controllers and Intelligent Control Device Manager.  Most importantly, the system will allow for agents in booths to control what messages are on the signs through the physical buttons that are installed by MAC Electric in the agent booths.  Intelligent Control Device Manager will allow for status and health monitoring and emergency overrides of all systems via the scenarios feature.

The project is still in the design phase with of the above mentioned stakeholders involved.  Although the GSA/CBP timeframe for the overall project completion date is far in the future, MAC Electric and Delcan Technologies expect to complete the project by the end of October with all implementation and testing completed.