You are currently browsing the news archives for June, 2014.

In April, Parsons, which is one of the largest transportation planning, engineering, and construction firms in the world, acquired Delcan. As a leader in ITS, Delcan will strengthen Parson’s offerings and help expand its geographic footprint in transportation.

Google announced that it plans to build 200 prototype driverless cars for a pilot program that will be tested later this summer. The car is designed to operate without human intervention. Although it will have manual controls as required under California state law, the production models will not have a steering wheel, accelerator pedal, or brake pedal.

A new study released by the US Department of Transportation’s (USDOT) National Highway Traffic Safety Administration (NHTSA) reveals that car crashes in the US in 2010 cost $871 billion in economic loss and societal harm. The study was based on the 32,999 fatalities, 3.9m non-fatal injuries, and 24m damaged vehicles related to motor vehicle crashes that occurred in 2010.

The Georgia State Road and Tollway Authority (SRTA) announced that the state’s Peach Pass RFID (Radio Frequency Identification) transponder will be interoperable with Florida’s Sun Pass and North Carolina’s Quick Pass toll collection systems by the end of the year.

ITS America Partners with SmartBrief

Intelligent Transportation Society of America (ITSA) has partnered with SmartBrief, a leader in digital publishing, to launch a new e-brief. This daily e-newsletter will provide the latest news and information on transportation innovations, research, training, best practices, and more to subscribers.

Recently, the American Public Works Association (APWA) held its annual North American Snow Conference, also known as “the Show for Snow,” in Cincinnati, OH. As an exhibitor at this year’s conference, Delcan Technologies was pleased to feature its Mobile Data Collection (MDC) systems, which generated a great deal of interest from conference attendees.

Michael Howarth and Sean Mulligan represented Delcan Technologies at the conference to demonstrate the powerful tracking and reporting capabilities of DTI’s MDCs. Michael and Sean enjoyed reconnecting with vendors and meeting with representatives from a number of different cities and departments of transportation. 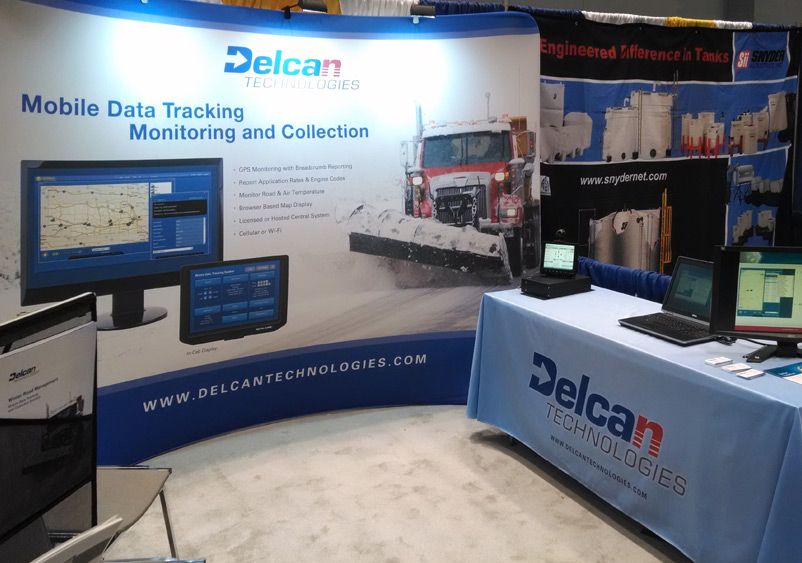 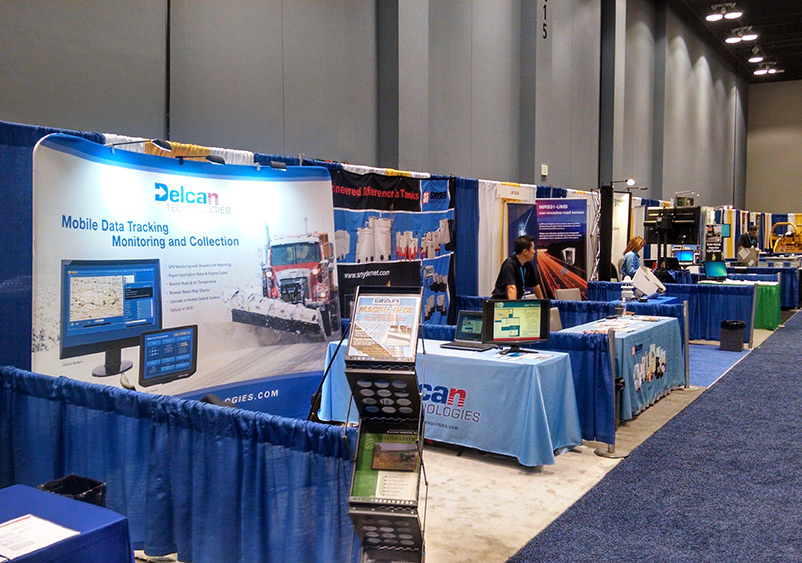 The first phase of the Michigan Department of Transportation (MDOT) intelligent snow plow project was a success. MDOT worked with Delcan Technologies and ITERIS to implement a winter maintenance program utilizing Mobile Data Collectors (MDCs) and a Maintenance Decision Support System (MDSS). MDOT has already implemented over 200 vehicles with this advanced solution and has seen operational results.

MDOT had an aggressive schedule to implement as many intelligent winter maintenance trucks (WMTs) as possible during the 2013/2014 winter season. DTI was awarded the contract in mid-September 2013. The central system was activated in November and all 273 equipment packages were delivered by January 1, 2014. DTI trained MDOT mechanics to install the MDCs, and, during a four-month period, they were able to install nearly all of the systems and enable advanced reporting features. All of this was accomplished amidst one of the worst winters in recorded history.

MDOT and DTI were able to create and implement more custom reports than were initially planned. These reports provide data specific to MDOT and are rich in details. They were conceived with the input from 18 administrators representing 7 MDOT districts. Each month MDOT administrators met with DTI for training and to discuss ad hoc reporting. This enabled DTI to create extremely customized reports for MDOT based on the needs of a range of users.

MDOT is able to use the information collected by the MDCs and the MDSS to proactively plan for winter weather events and to provide preventative maintenance on the WMTs.

Garage supervisors have been able to adapt their operational and resource planning based on forecasting and treatment recommendations from the MDSS. For example, one garage supervisor called in more crews based on an MDSS forecast, which came several hours before the TV news forecast predicted snow.

MDOT is also able to use data collected by the MDCs to schedule preventative maintenance for their vehicles. MDOT uses vehicle engine hours to schedule inspections and maintenance. Previously, the engine hours were manually recorded by the operators. Now the MDC system automatically collects vehicle data and integrates it with MDOT’s existing fleet management system. The MDCs streamline the data gathering process, which saves time and improves data accuracy.

MDOT uses MDC data to generate reports that can be reviewed for operational efficiency. For example, MDOT research determined that snow plows should not exceed 25 mph when applying de-icing material to maximize efficiency and provide the highest level of service. MDOT can now generate reports to show operator speeds, locations, and material application rates, which enables them to conduct operational reviews.

Before the 2013-2014 winter season ended, MDOT was already able to change the way they plan for winter weather events. They can now take the effectiveness of their winter road maintenance operations to the next level.