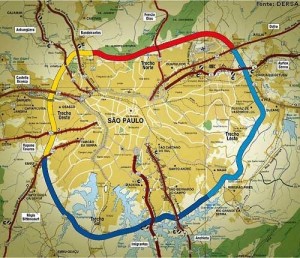 Intelligent NETworks® was recently launched in Sao Paulo, Brazil in partnership with ASPECT Midia. The installation was deployed along Rodoanel/SP, a major roadway around Sao Paulo City, for about 37 miles. Once installed, the system was able to provide accurate and helpful travel information to the motorists along this major roadway. Began in October 2009, the project was completed in June of 2010.

This particular deployment of Intelligent NETworks included the DMS, CCTV and Map modules. NTCIP was specified for the entire system making deployment and field device integration much faster. Delcan Technologies and ASPECT Midia partnered on the installation and have previously worked to incorporate NTCIP into ASPECT Midia’s DMS signs, which were deployed in this project. This project also involved integration to Bosch CCTV cameras which also support NTCIP.

To learn more about ASPET Midia visit their web site at http://www.aspect.com.br/