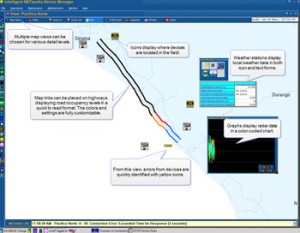 Delcan Technologies, together with Americas Resources, was selected to implement a central system for a number of devices including SOS phones, radars, cameras, weather stations, and variable message signs in Mexico.

Intelligent NETworks® Device Manager was deployed in the Pacifico Norte region to assist monitoring and control of several devices. These devices include radars, which provide occupancy and speed data to the user. This colors the map to indicate in an easy to read interface with occupancy data. DTI’s software also controls the variable message signs, and places them on a map with their real position. Weather stations are placed on the map that retrieves current conditions including temperatures, precipitation levels, and air pressure. Device Manager polls and monitors approximately 130 devices.